I have a lot of same “div” all over my website. First, I used a global style to style the content: it was quick and easy, just a class to add at every “div”. As @Marius suggested that relative style would be a better solution.
So, I tried it this morning, but it seems impossible to add the same relative style all over the site

I want to style the “div texte”

Could you share your Relative Styling class setup, you created inside the modal? 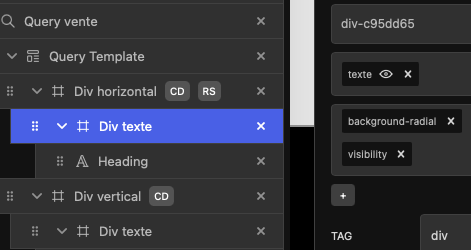 It works for this div, but even if I add the same class to the others, it doesn’t work

Thanks for clarification @Ombres-et-lumieres
The way you described the process is correct as far as I am aware, also the RS class is setup properly.
I would take a closer look if you remove temporarily the maintenance mode on your live site.
Might be a thing due to the query template, will check.

Edit:
So after checking again, it is most likely possible you would need to target the original text class itself (.div-c95dd65), instead of the additional .texte class.
The reason behind this is, that additional classes won’t get linked to the original block.
Only the actual class itself gets added as an additional class to the other linked blocks.
Since you don’t have direct access when using queries, you can’t add additional classes manually to your generated blocks, so you need to stick with the original CSS class that is attached to the block. You still are able to set a custom class name for that.

It is no more in maintenance mode: there is still a lot of problems, but il will be easier for the helpers.
For this moment, I use the global classes. I will try your solution later (working on the responsivity)

So I just checked your live site.
Did you change the .texte class to .visibility-texte?
It’s actually the case all the classes do indeed show up in each query item, so there shouldn’t be any issue.
You just need to target the correct class.
Don’t forget to switch to the “hover” mode (top right dropdown where it says “normal” as default) as soon as you are inside the relative styling class panel, so the effect will show up properly.